The Grace Project Prospecting Licences and surrounding Exploration Licences cover approximately 350 square kilometres and are located 25km to the Southeast of the 32 Moz Au and 1mt Cu Telfer gold copper mine. 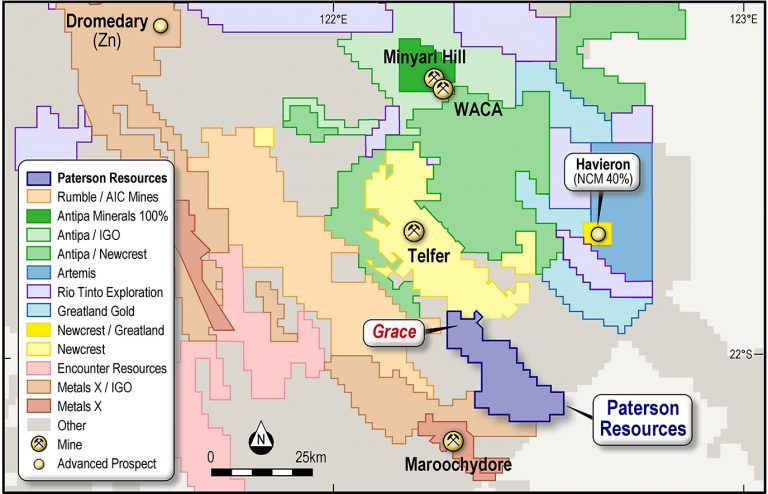 The project is highly prospective due to both the area having a disrupted exploration history and the similarities to other projects surrendered by Newcrest in the Telfer region at a time in the early 2000’s when there was a hiatus in production from Telfer before recommencing again in 2004 as a bulk mining operation.  The former Newcrest projects achieving outstanding results for a number of junior listed companies are namely Greatland Gold Plc’s Haverion Prospect (in a $100m JV with Newcrest), Antipa Minerals Ltd with Minyari and WACA Prospects plus the Citadel Project (in a JV with Newcrest) and Encounter Resources Ltd’s Lamil Project.

The Grace Project area is located approximately 25 km southeast of the Telfer gold mine and consists of a sub-greenschist facies regional stratigraphic sequence of quartz rich sandstones and interbedded siltstone/dolomite units of the Malu and Isdell Formations. Hydrothermal breccia’s cut the layered stratigraphy and gold mineralisation is associated with quartz-dolomite-pyrite veins and hydrothermal breccias. Highly altered metosamatised dolerite intrusives, occur locally throughout the project area and play an important role in overall fluid architecture and ultimately gold deposition. The Grace deposit has been drilled along 450-500 metres of strike and 90m across strike to an average depth of 73.4m. High grade shallow oxide gold mineralisation commences from surface and in general transported cover (i.e. sand dune and/or colluvium) is thin over the project area. Drilling has been on a close spaced drill pattern (i.e. 25 to 100m, generally 50m, “northeast-southwest” sections with 10m to 20m “northwest-southeast” spacing on section). The base of complete oxidation generally occurs between 20 to 60m below the surface, below which transitional and primary sulphide gold-copper mineralisation occurs. Grace oxide mineralisation is variably open along strike and at depth associated with shallow dipping en-echelon stacked vein sets and a large vertical stockwork of hydrothermal breccias along the Grace-Bemms shear. At the Grace deposit high grade primary gold remains open in all directions and the relationship for further high grade copper mineralisation remains prospective. Drilling is generally shallow and any deeper drilling is broad spaced – resulting in the data suffering from ‘information effect’ as many holes stop within the mineralised zone at Grace and the deeper drilling is insufficient to have adequately tested the continuity of gold mineralisation at depth.

Inferred Mineral Resource of Oxide / Transitional Mineralisation of 1,590,000 tonnes @ 1.35 g/t Au of 69,000 ozs. Based on historic drilling carried out by Newmont Australia/Newcrest with no subsequent exploration drilling since 2004. All material assumptions and technical parameters pertaining to the resource estimate below continue to apply and have not materially changed. 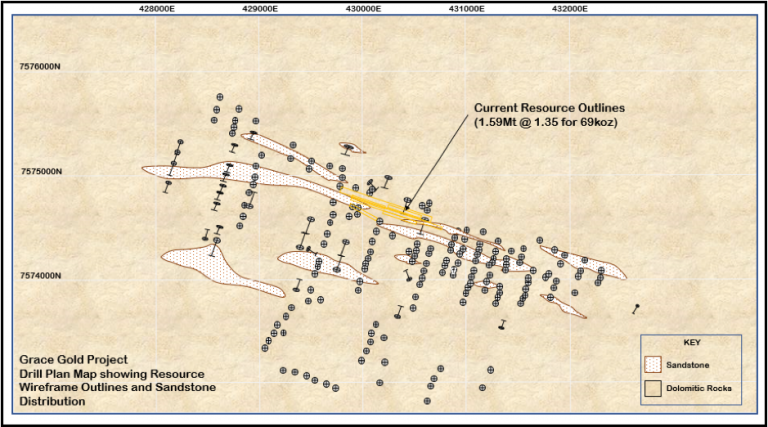 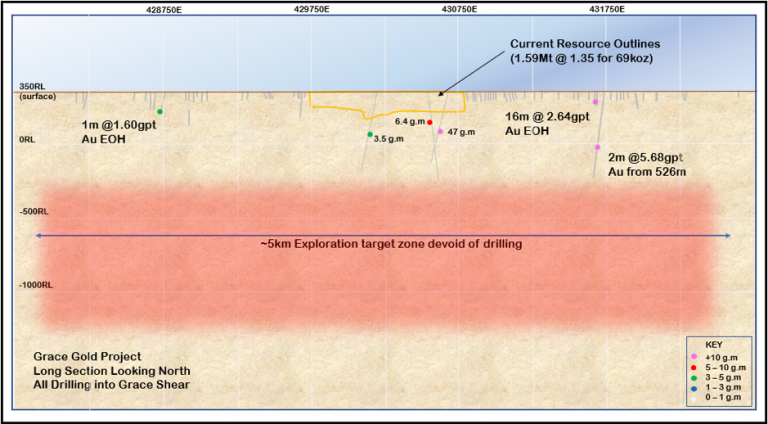 The copper mineralisation observed in drilling at Grace has not been modelled due to insufficient data spacing. Further drilling is anticipated to enable copper-bearing zones to be more accurately correlated with lithological or structural information and accordingly enable this to be incorporated in any future Mineral Resource estimations.

The IP response of a chargeability high in all cross sections re-modelled suggests the presence of sulphides (predominately pyrite/arsenopyrite) within the dolomitic siltstones. Gold-copper mineralisation is associated with sulphide zones.  The sulphide zones are generally associated with higher resistivity values (intense quartz and carbonate brecciation/silica alteration). The mineralised Grace/Bemms shear corridor is clearly defined by a chargeability high with a similar zone evident over the Lakes area.

The IP anomalies have not been fully drilled both along strike and at depth. The IP has limited depth extent with the 50m DPIP “seeing” approximately 125m in depth and the 100m DPIP approximately 200m in depth. Better quality and depth penetration can be achieved with modern IP systems. Further IP surveys are planned over the project area to comprehensively map the two parallel chargeability corridors and identify the scale of deeper geophysical responses and the implications that a much larger scale gold-copper mineralised system may be present. 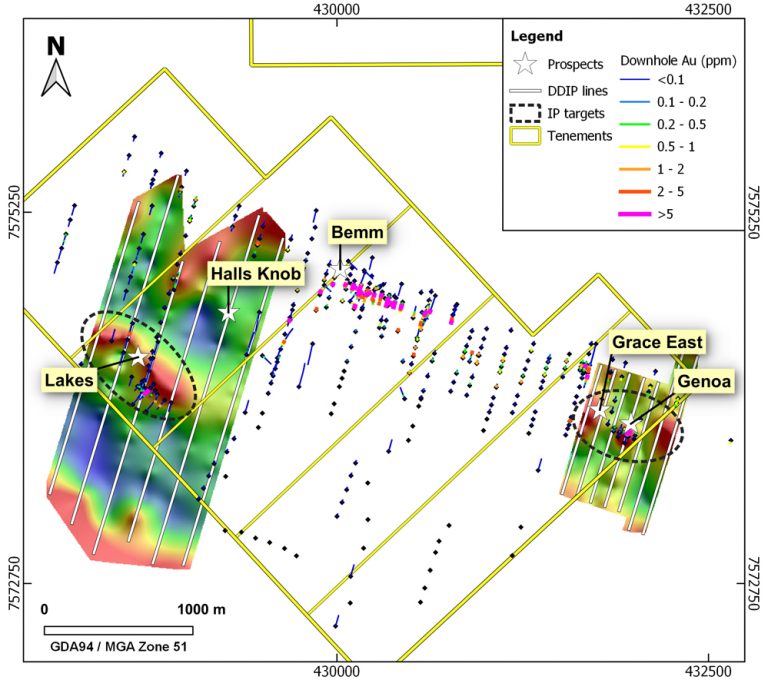 In addition work by the company’s geophysical consultants has highlighted magnetic features from the regional scale aero magnetics. 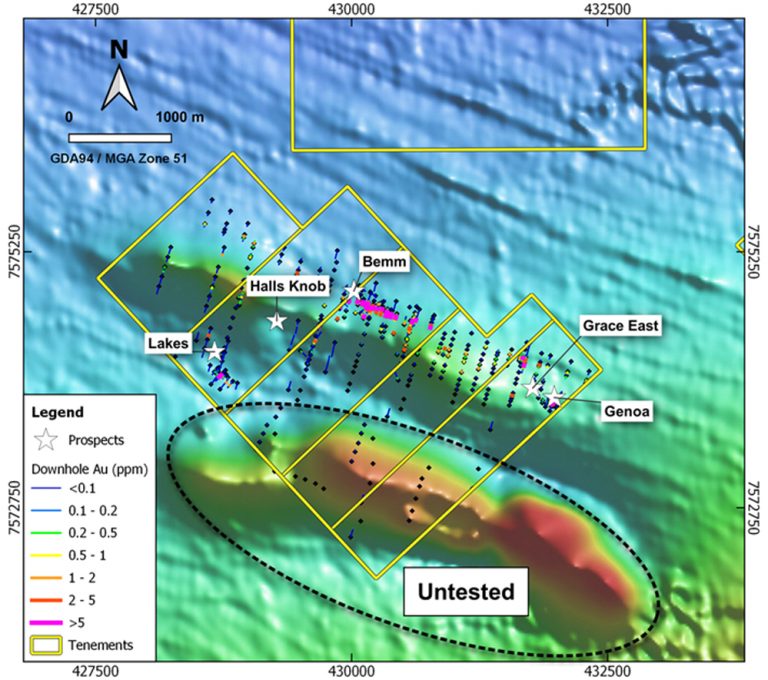 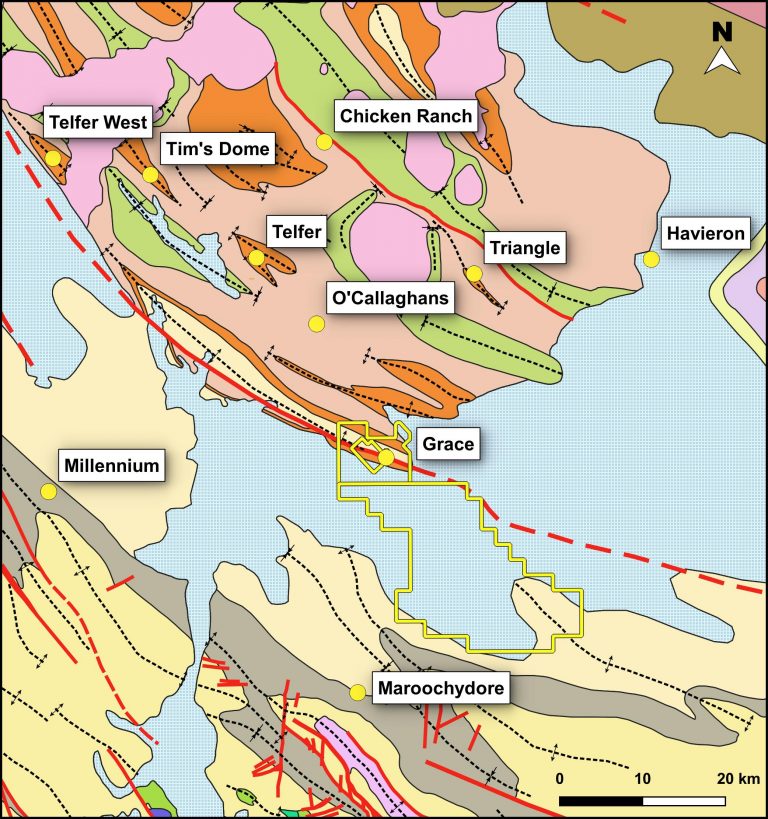 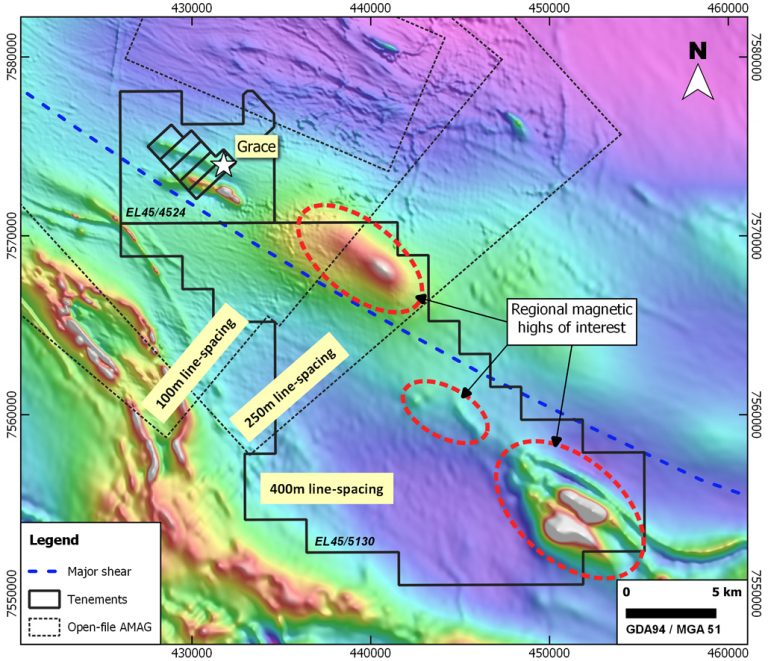