The Burraga Project is comprised of 4 Exploration Licences (EL6463, EL6874, EL7975 and EL8826). Approximately 2km south of the village of Burraga is the historic Lloyds Copper Mine, the focus of a majority of exploration focus of recent years. In the Northeast corner of EL6463 some 7km North Northeast of Burraga is the Lucky Draw Gold Mine which was mined in the 1990’s.

The Lloyds Copper Mine produced 19,443 tons of Copper from 469,626 tons of ore implying a recovered grade of 4.14% Cu, between 1880 and 1920, then intermittently up to 1961. The initial focus for copper exploration at Burraga was the confirmation of extensions to the original Lloyds Mine ore body. Following drilling and exploration carried out from 2012, a resource statement was compiled in 2015 incorporating both historical and modern data. 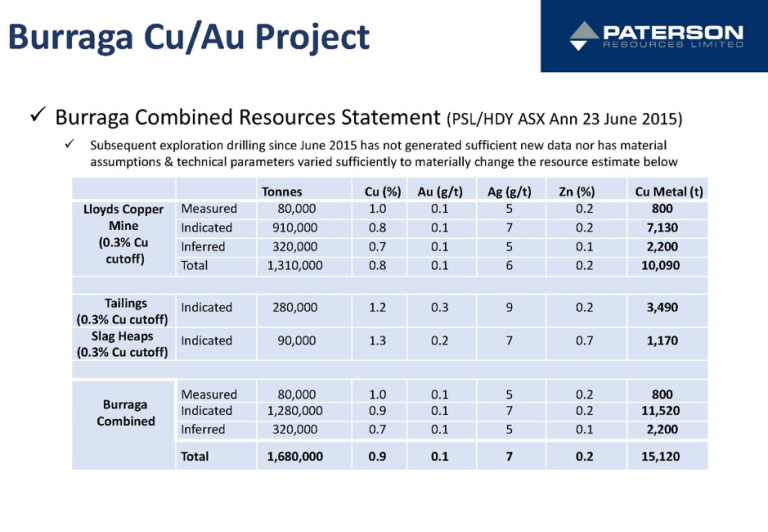 As a result of mining at the Lloyds Mine and to a lesser extent at nearby operations, there is a tailings dump and two slag dumps of 370,000 tonnes containing 4,660 tonnes of copper metal.

The main gold mining production within EL6463 occurred at the Lucky Draw Gold Mine, discovered by Renison Goldfields Consolidated Ltd in 1980 where it mined 1.41 million tonnes of ore at an average grade of 4.2 g/t Gold in the early 1990’s. A remnant non JORC Resource of ~30,000 ozs was left behind in an unmined pod northwest of the existing pit.

Similar mineralisation to Lucky Draw was also discovered by Renison at Hackneys Creek some 800 metres north of Lucky Draw where a non JORC Inferred resource from the 1990’s of 2.21 mt @ 1.4g/t Au for 101,800 ounces.

Consists of approximately 24 square kilometres (8 units) and is located to the east of EL6463. The geological setting of EL6874 is characterised by the Burraga Granite and Rockley Volcanics. Preliminary geophysics and surface geochemistry sampling on the Burraga Granite contact is planned to establish drill-ready targets for Lucky Draw style mineralisation.

Consists of approximately 75 square kilometres (25 units) and is located to the east of EL6874. The western portion of EL7975 covers the eastern portion of the Burraga Granite and Rockley Volcanic intrusions.
The primary area of interest is the Isabella gold prospect in the Southeast corner of the tenement.